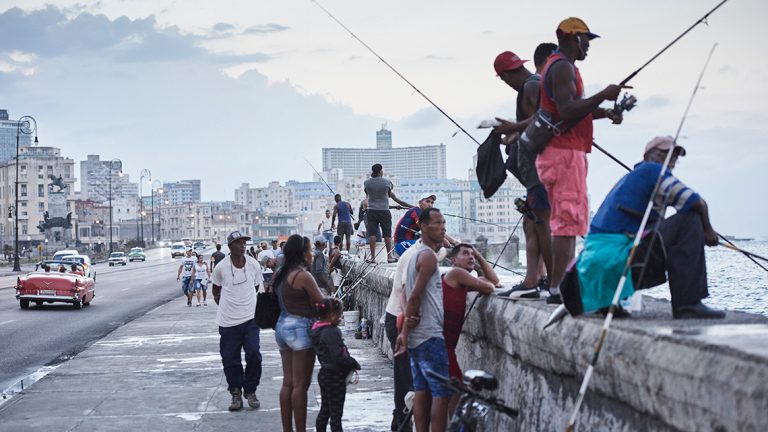 From the vast Revolution Square to the now golden-domed Capitolio building; no visit to Cuba’s capital is complete without a tour of the city’s architectural marvels. But for a taste of Cuban spirit, its heritage bars are also among the top five places; everybody has to visit in Havana, according to our resident travel writer.

Wonderfully warm and inviting, full of curiosities and contradictions. Half-millennia-old Havana is bursting at the seams with layers of history, cultural spark and irrepressible spirit. The past clashes pleasingly at every turn; with candy-pink American Cadillacs rolling past the peeling old Spanish facades of the Malecon seafront. While communist brutalist structures puncture the horizon. The city poses many questions to travellers, the first of which is where to start. But the best way to see this sultry seaside city is to dive in and let it wash over you.

For me, no trip to Havana would be complete without ticking off the city’s iconic architectural attractions; including vast Revolution Square as well as the high-domed Capitolio building. But Cubans know that the best things in life are free. Additionally inside the city’s steamy streets, music, dance and rum cocktails welcome strangers in a warm embrace. As two of the World’s best cocktails – the mojito and the daiquiri – have Cuba as cradle; the city’s heritage bars are also among its top sightseeing spots. And are even present in some tours to let travelers sample the Cuban spirit.

Havana’s top of the pops 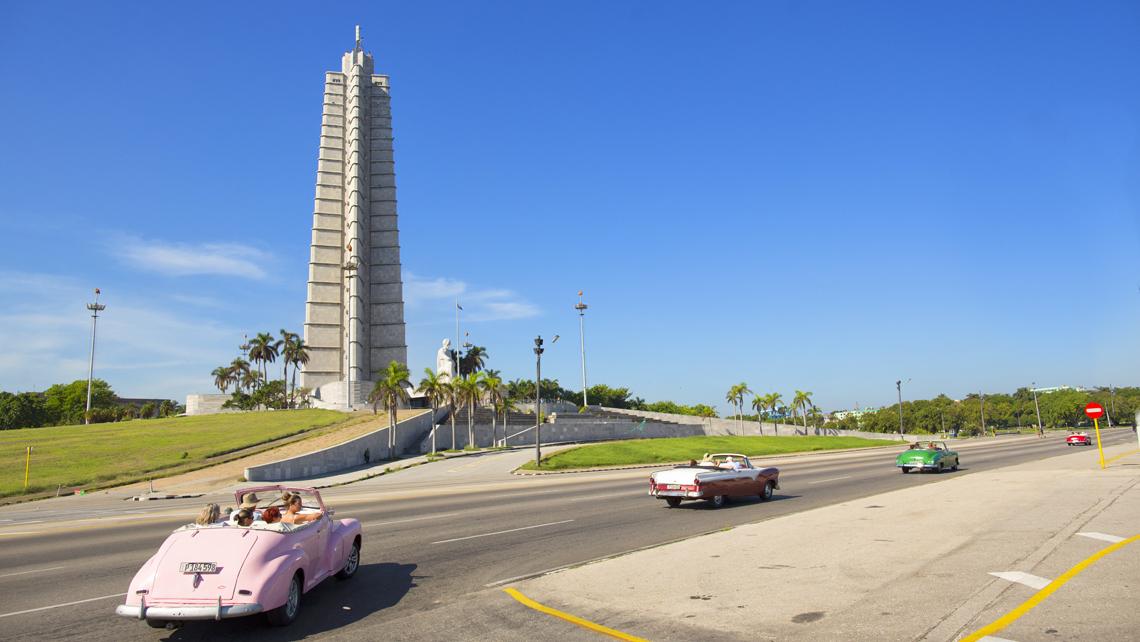 Revolution Square: Havana’s political epicentre; a massive expanse of space, the 31st largest city square in the World; that has served as a scenario for Cuba’s most important events.

The square was initially named “Plaza Civica” (Civid Square); but it was renamed as “Plaza de la Revolución” (Revolution Square) shortly after 1959 revolutionary coup. The silhouette of Ernesto “Che” Guevara’s face is traced out in giant iron rods against the side of a government building; alongside Cuba’s guerrilla hero Camilo Cienfuegos. With rebel icons and Chevrolets circling the square, it could almost be a 1950s film set. 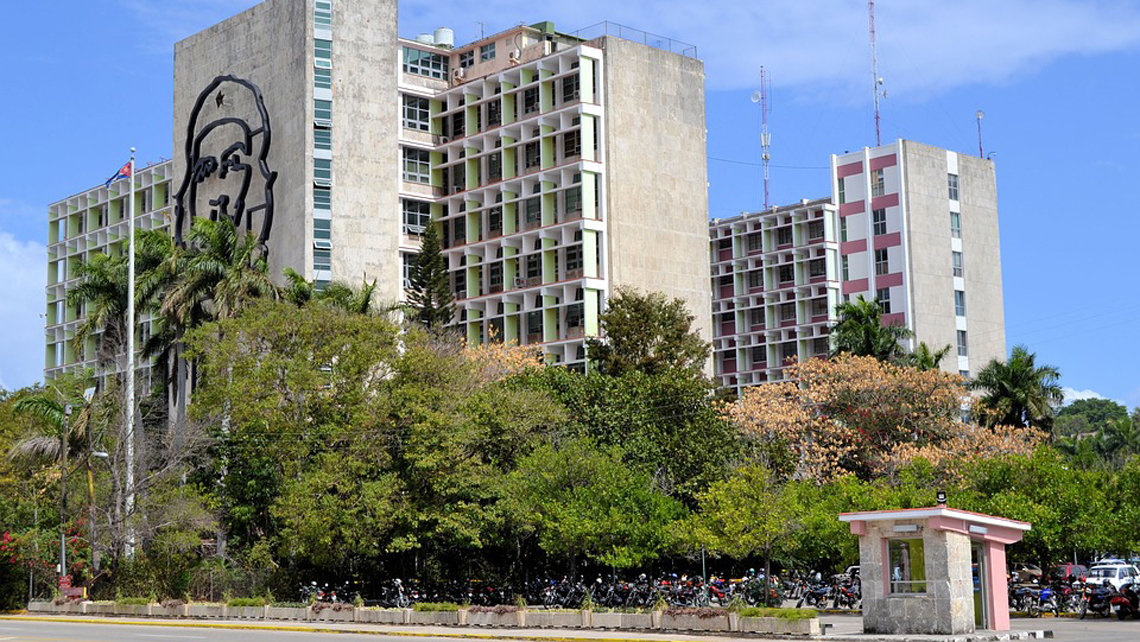 The towering needle-like Marti Memorial marks the centre of the square. At 139 metres high, visitors can ascend via the tower’s lift for panoramic views over the city. Furthermore, this was the place where former Cuban president Fidel Castro greeted the masses many times after toppling Batista’s government. And it still acts a meeting place today for national events such as May Day (Worker’s Day in Cuba). When thousands parade, dance and play music along the streets.

Possibly the most famous and historic of Havana’s hotels; the attractive and imposing façade of the Hotel Nacional de Cuba stands watching over the Malecon sea wall since 1930. Built on a slight hill in the Vedado area; the eight-storey hotel’s double turrets make it recognisable from all over Havana. Always the hotel of choice for Cuban generals, rich American mobsters and a long list of vintage film stars.

The hotel has a truly fascinating history. It was the site of siege between opposing sides of the Cuban army in 1933. Also the place where IATA was founded in 1945; and in 1946 it hosted an infamous mob conference; immortalised in the film The Godfather part II. Today it still oozes timeless glamour, with glittering chandeliers, marble floors, grand stairways and immaculately groomed grounds. Overlooking the Straits of Florida; its terrace bar serves up among the best mojitos in the whole of Havana, if not the World.

The celestial golden dome of El Capitolio rises above the rooftops of Old Havana; an unmissable beacon of another era in the city’s storied history. Built in 1929; it resembles the grandeur of the US Capitol building in Washington DC. But it was in fact inspired by the Pantheon in Paris. Once home to the Cuban Congress, it was abandoned after the revolution. But has been slowly restored to become one of the city’s most recognisable landmarks.

Reopening this year in time for Havana’s 500th anniversary; visitors can once again discover its grand interiors, classical statues, sweeping staircases. And palatial halls standing below its 62-metre-high dome. Where a huge replica diamond is set into the floor; marking the start or “kilometro cero” (kilometre zero) of the central highway that crosses the island. Don’t miss the chance to take a photo of the cavernous “Salón de Pasos Perdidos” (Hall of the Lost Steps); or a selfie with the “La Republica” (Statue of the Republic), a dazzling surprise for visitors. The 17-metre-high bronze sculpture covered in gold leaf is the World’s third largest indoor statue.

Notorious for its classic rum cocktails – the mojito and the daiquiri – to get into the spirit of Havana; simply head to this famous bar. Tucked inside Havana’s UNESCO-listed old quarter, La Bodeguita del Medio has found fame as the birthplace of the mojito. It was also one of legendary American writer Ernest Hemingway‘s favourite. Watering holes when he lived in Havana; and it’s still one of the city’s most atmospheric spots to grab a drink.

Countless other celebrities and musicians have visited too; with some framed photos hanging as a testament on the wall in the compact and colourful front bar. The most famous memento, however, hangs above the optics. With the note from Hemingway in curling script declaring: “My mojito in La Bodeguita, my daiquiri in El Floridita.”Like many bars in Havana; a band of musicians is usually huddled into the corner playing traditional Cuban tunes such as “Guantanamera”; while visitors refresh themselves with minty mojitos in the humid Havana heat. For more than a mojito, a restaurant serving decent food sits behind the main bar; and is usually much less crowded than the front.

Dating back to 1817, La Floridita is credited as the “cradle of the daiquiri”. For being the bar where the famous frozen cocktail was invented in the 1930´s. That is why, it was another of the writer Ernest Hemingway’s favourite bars. Where he has been immortalised in a life-sized bronze bust; perched in his regular spot at the end of the bar. As well as serving up icy lemony daiquiris by the dozen with a succession of musical trios; providing rhythmic Cuban sounds, it also has a fish restaurant at the back. Making it the perfect place to end a walking tour of the old city. Difficult to miss, with its shocking-pink façade and 1950´s diner-style sign, it’s a cornerstone of Old Havana.

For a portal straight to Havana’s heart, follow the tourist trail to these five popular, unmissable places.

Get ready for time travel in Havana

Depending on time, visitors can take a whirlwind tour of Havana’s sights or savour the city more slowly. One of the most relaxed introductions is a combined classic car and walking tour; that includes a cruise along the Malecon in a shiny 1950s American car. Passing by the Hotel Nacional and up to one of Havana’s key arteries; then from Paseo del Prado, to El Capitolio and beyond to Revolution Square.

With key stops at both La Floridita and Bodeguita del Medio, a guided walking tour of Old Havana winds through cobbled streets lined with pastel-hued Spanish facades. Punctuated with yawning doorways and graceful courtyards alive with music and activity for most of the day and night.

Taken together, these five places on Havana’s beaten track offer a fabulous taster of this magical and endlessly-fascinating city.