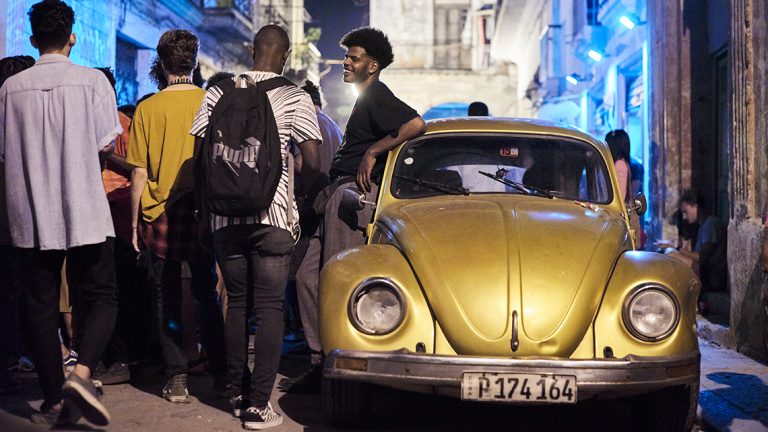 From a parade along the handsome Paseo del Prado to a foray into gritty and vibrant Central Havana; travel writer and cubaphile Lucy hits the storied streets of the Cuban capital as it celebrates its half-millennia birthday.

If the streets could speak, what stories would they tell? As Cuba’s capital Havana turned 500 years old in 2019; I went to visit the “grand old dame of the Caribbean”. In order to explore the layered timeline of its remarkable skyline – Spanish colonial, neoclassical, Americana, Soviet Brutalism. Also to dance, drink and to utterly fill in myself by its inimitable spirit.

Half of my heart is in Havana

It’s midnight on Havana’s Paseo de Prado and the sound of rhythmic Afro-Cuban drums and percussion is growing ever closer. A parade of hundreds emerges from the shadows; and before I know it an old man has taken my arm and I’m in the thick of the procession. I’ve been in Havana for just a few hours, arriving for a sunset stroll along the iconic Malecon seawall. Then I’m already an honorary “Habanero” – this is a city that takes you in with a warm hug and claims at least half your heart.

Wonderfully inviting, full of curiosities, contradictions and colour; Havana is one of the world’s best cities to map with your feet. Running the length of the city; the Malecon makes navigation easy and offers the perfect place to start and end a walkabout.

Legend has it that Havana was founded 500 years ago in 1509; when the first stone was laid beneath the shade of a huge “ceiba” tree at the entrance to the old harbour. The Spanish conquistadores gradually expanded the city along the narrow entrance to the bay. And it’s here that you can see some of the Caribbean’s oldest buildings.

Today Havana is the grand dame of the Caribbean; an endlessly fascinating city of faded glamour with unmistakably feminine architecture that’s colourful, curvy and ornate. Once-handsome Spanish mansions stand like fraying relics of historical dress in a museum. Except still worn, bought at a jumble-sale, and patched up.

Hemmed in by the sea on one side and Paseo del Prado to the west; Old Havana was handed UNESCO World Heritage status in 1982. Cobbled streets are lined with pastel-hued Spanish facades, punctuated with yawning doorways and graceful courtyards. Narrow lanes open into grand old squares with leafy parks and palatial colonnaded homes originally built for the ruling elite.

The lack of global logos and advertising helps maintain its historical air; but although this is an open-air museum, it’s a neighbourhood too, where people live and work. Much better than adverts, Cuba’s painted streets are a work of art. Where buildings are splashed with murals, graffiti, socialist slogans and philosophical phrases. One colourful wall sporting the instantly-recognisable silhouette of Cuban revolutionary Che Guevara reads: “Amor cuerdo, no es amor” – which translates to “Love without madness is not love”.

Fill in with Havana´s rhythms

Music and dancing are in the city’s DNA, pulsing through the streets and intoxicating young and old alike. Powerful orchestral music overflows through the windows of the world-renowned Bolero Havana Ballet School, adding to the city’s soulful atmosphere. And it’s not even lunchtime as I stroll out along Obispo Street: Old Havana’s main thoroughfare. But a fabulous octogenarian in a red dress is throwing shapes outside a café; while one of Havana’s many musical trios weaves salsa rhythms inside.

Despite their international fame; it’s still possible to catch Cuban band Buena Vista Social Club tunes. Usually at their residency at “Legendarios del Guajirito Buena Vista Social Club”. Situated close to Havana’s main train station – the gorgeous, recently-restored Estacion Central de Ferrocarriles. I was fortunate enough to see living legends from the band, Omara Portuondo and Eliades Ochoa; performing classic hits such as “Chan Chan”. Though some Cuba travel experts consider the place a bit cheesy; I had a hell of a time there channelling the Cuban spirit with another of the country’s original creations – an icy lemon daiquiri.

Less traditional music has taken hold in Cuba too – a night at Fabrica de Arte (FAC) in Havana’s Vedado district. Reveals the Cuban youth’s love for reggaeton, and the subsequent creation of “Cubaton” – the island’s own take on the gender. Elsewhere, if you keep your ear to the ground; there are all sorts of hidden bars and secret clubs popping up. Though it is currently closed, I met Cuban DJ Alain Dark at Bar Roma in Old Havana. Where he was stoking a fledgeling electronic music scene.

Beguiling as old Havana is, Central Havana is probably the city’s most exciting district. Both beautiful and gritty, like salted caramel its sweetness is tempered by sea air and decades of decay. Its crumbling grand houses simmer with local life; salsa floats out temptingly from arch doorways. And if you are lucky you may be invited inside.

Locals perch on the curb scoffing bowls of tomato spaghetti from a takeaway kitchen. Kids play catch with a mango, and local grannies lean out gossiping from wrought-iron balconies strung with washing. In the dim evening light, I spot a dog munching on a pig’s head; while another barks and sets off a chain reaction of howls down a pot-holed lane.

It’s little surprise that Havana’s vibrant Dickensian streets have enchanted many a writer. Havana became American writer Ernest Hemingway’s second home in the 1940s and 50s. Another famous American writer Truman Capote frequented the city before the 1958 Cuban Revolution; and celebrated novelist Graham Greene chose to base his fictional spy in the city in “Our Man in Havana”. Havana has always drawn notable intellectuals and artists too. Including the French philosophers Simone de Beauvoir and Jean-Paul Sartre, who even had a meeting with Fidel Castro.

From Ava Gardner to Frank Sinatra, the American stars of yesteryear were huge fans of Havana as well. Today it continues to draw big names to its sultry streets; with modern-day celebrities such as Owen Wilson, Paris Hilton, Jay Z and Beyonce. Even the Kardashians and the Rolling Stones all visiting in recent times.

With its 1950s classic cars and lack of globalisation, people say Havana is in a time warp. But I think it’s more like another dimension where multiple possibilities sit side-by-side. It’s one of the things that makes this half-millennia-old city so cool and unique; and ensures a city break like no other.