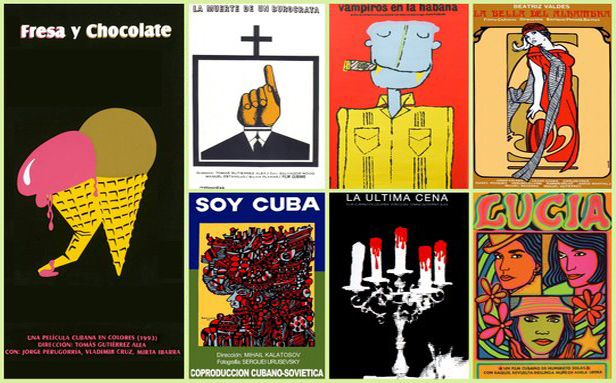 My introduction to Cuban cinema wasn’t in one of the old but glorious 1000 + seater cinemas in Havana. It was on a tiny tv on a Via Azul tourist bus to Trinidad de Cuba late February 1997. There, during my first trip to Cuba, I saw The Last Supper, by the celebrated director, Tomas Alea. Over the next few years I was to be treated to several other Cuban greats such as the classic, Lucia (Humberto Solas); and the newly released, Amor Vertical (Arturo Sotto). I have to say it was very disappointing when this ‘cinema bus,’ tradition came to an end.

As I love cinema and Cuba´s culture I had seen the two most famous Cuban films, Memories of Underdevelopment and Strawberry and Chocolate (also by Alea). But to see my first film in Cuba felt like a baptism. 60’s Cuba was an amazing time for film, music and art. In Mirtha Ibarra’s (Strawberry and Chocolate) tender documentary about her husband Alea. He talks about how he, and all the other Cuban film makers, rushed back to Cuba immediately after the revolution; eager for the opportunity they’d been waiting for, to make their films.

At last year’s Havana Glasgow Film Festival (HGFF) Strawberry and Chocolate was screened on it’s 25th anniversary; its hosters were thrilled to have two of it’s three lead actors, Mirtha Ibarra and Vladimir Cruz as guests. The standing ovation at the end, showed that the film hadn’t lost its’ relevance and magic. This would be an excellent film to begin your exploration of Cuban Cinema.

Immediately, this film became a national even. Then achieved numerous awards at the world’s leading festivals, until obtaining a nomination for the coveted “Oscar”. This sincere and tender story tells of the carefree friendship between Diego, an intellectual and Havana homosexual, and David, a young man from the countryside; also a member of the communist youth and fervent defender of the Revolution.

The film develops its action during difficult years – the ‘70s – where sexual stigmas prevailed, causing fear and silence. However, more than a song in favour of respect for homosexuals, the work is a denunciation of intolerance and authoritarianism that represses different people. Whether for political, sexual or any reason.

In spite of the impact generated by denunciations of the film, the officials and authorities of the island tolerated it. Since it encouraged a respectful debate, in tune with “the new Cuban socialism”. Strawberry and Chocolate – with its celebration of friendship and tolerance – opened doors; allowing the different, the marginalised, a triumphant entry onto the Cuban public stage.

Another must see film, counts as one of the top 100 films of all times, also from Alea´s (26 years earlier). A startling and complex film it is cinema very much of its’ time. I found it more difficult to watch than I had in the past. But it does what all great director’s films do, challenges you and make you think.

Tomás Gutiérrez Alea’s film would be a landmark in the development and international reception of Cuban cinema. Set during the time between The Bay of Pigs invasion and the Cuban Missile Crisis – a period of intense uncertainty for the island – the film tells the story of Sergio. A bourgeois dilettante who stays on the island while his wife leaves. His reason for staying seems not to be so much dedication to the Revolution as indolence, as he mooches around Havana spying on his neighbours. Cursing the state of the nation and picking up young girls. From this premise the film spins a dense, self-reflexive web mixing documentary and fiction; in a fashion as precarious as Sergio’s state.

One of the most daring films to come out of Cuban cinema, and one of the most politically and aesthetically sophisticated films to emerge from anywhere in the late ’60s; it would be hailed (and misread) by American critics as a dissident work. In fact, Alea’s intention – as always – was to critique the Revolution from the inside. Some ’60 radical films seem to belong to a distant era; Memories of Underdevelopment still feels vitally relevant and prescient. Deeper details here!

The film with the most international success since Strawberry and Chocolate is the fairly recent Conducta. (Behaviour) also presented delightly at first HGFF in 2015. It was showed at Glasgow’s most popular Independent cinema, the Glasgow Film Theatre and the audience loved it.

This intense drama from 2014 shows the difficult life of a child. Who tries to survive after abandonment by his father and the alcoholism that consumes his mother. The protagonist, moulded by a hostile environment, trains fight dogs – an illegal activity in Cuba – to make ends meet. Can his life change when he finds, in an understanding but severe teacher, a lifeguard who tries to keep him afloat; in contrast to the more traditional methods of his other teachers, who seek an easy way out of a complex situation?

This film by Ernesto Daranas was the biggest critical and commercial success in Cuba of the decade; through developing with mastery the relationship between its characters, teacher and student. However, the film goes much further, by criticising society and proposing a much more agile and open educational system.

My personal favourite film is La Pared de Las Palabras; directed by Fernando Pérez. Probably Cuba’s most popular director working today. This film isn’t considered one of Cuba’s top 10 films of all times. Perez’s Suite Havana garnered more acclaim in Cuba, but it is certainly one of mine. It’s not always an easy film to watch; but that is its strength and I found it, compelling, honest and uplifting.

Luis, suffers from dystonia and cannot communicate through body language or words. Between the medical institution and family, his inner life is an impenetrable wall. A beautifully crafted story of a family that falls apart when one of the siblings becomes disabled. Pérez provides a parable of the difficult topics of human communication, pain and the limits of sacrifice.

Cuban actor Jorge Perugorría, who plays Luis, told The Havana Reporter that the film presented him with one of his toughest career challenges; since Tomás Gutiérrez Alea’s Strawberry and Chocolate. To learn about the disorder he had to visit institutions where patients with dystonia are treated. Lose weight and change some of his habits in order to identify with the inner world of Luis, his character’s name.

“In spite of all that, it was still somewhat like walking on a knife-edge. But I had so much confidence in Pérez that I let him guide me,” he said.

No introduction to Cuban cinema would be complete without the iconic Lucia. Director Humberto Solas believed that the position of women most accurately portrayed the state of a society. In the three stories making up this film, there are lots of passionate dramas; which bring viewers closer to the struggles of Cuban women during the different stages of revolutionary combat, to achieve national independence.

The three women in each of the stories are called Lucia; as if each one in their time was an extension of the previous one. Putting each generation into relief, and demonstrating a commitment to continuity. In each of the three stories, photography, editing and female performances. Taking the viewer through a cinematic experience, where the passion of the protagonists carries the weight of the action; and guides the rest of the characters. Lucia is an excellent work where female characters are allowed to shine; it is a story of women struggling to transform their lives and national history. The last two films in this intro are shorts both from the 1960’s.

Cuba has long had a conflicted relationship with both its larger neighbour, the US, and with race. If the revolution was supposed to have ended racism, by the early ‘60s the US was mired in the struggle for civil rights; a battle that has still far from been won. Santiago Álvarez was the top newsreel director on the island. He used an incendiary mix of photos and stock newsreel footage to castigate American racism in Now!  Alvarez once stated, “”Give me two photographs, a moviola and some music and I’ll make you a film” – that’s essentially what he did here. Except that he was very lucky that leading African-American singer Lena Horne gave him her song “Now”, banned in the U.S., to use as his soundtrack.  Here is the whole story.

The combination of song and dynamic montage of images is overwhelming in what comes on like some agit prop proto pop video; and is the very model of an engaged, politically committed film. Its theme is still depressingly relevant, as, thrillingly, is its technique. Which anticipates the current fascination for appropriating archive footage and imagery in artists’ film.

One of the principal aims of the Cuban Revolution is to achieve equality for the Cuban population; and education was regarded as one of the principal means to achieve this.  Since much of the population was illiterate, due to education being beyond their financial means, the Cuban film institute ICIAC was tasked with a pedagogical function making many classic short documentaries.  However, some rural Cubans were so poor that they hadn’t even been exposed to cinema before; which is why cine móvils – mobile cinemas – were set up.

For the First Time documents one of these mobile cinema’s arrival in a small town in one of the remotest regions of Cuba. The kids and locals are quizzed about their hopes and expectations for what a cinema screening might be like. When the big night arrives, no one’s disappointed. As the camera regards the viewers watching, reacting to and laughing at Chaplin’s Modern.

The Festival is co-curated by Scottish filmmaker Eirene Houston in Glasgow and Cuban filmmaker and writer Hugo Rivalta in Havana. Both met whilst Eirene was teaching screenwriting at the EICTV (Cuban Film School). Meanwhile Eirene was developing projects for the GCC International Twinning department with Hugo and other filmmakers; they realized that one of the best ways to build on the links between the two cities was through film and culture, their field of expertise. Cuban film is criminally under-represented outside of Cuba and they were in the perfect position to bring it to Glasgow. With the enthusiastic support of Glasgow City Council, the Havana Glasgow Film Festival was born, in 2015.

With HGFF’s unique access to Cuba’s wealth of films, proud to be the only festival platform for Cuban feature films and culture in the UK. Through screenings and discussions, Scottish audiences is provided with an insight into Cuban history and Cuba today. Discovering what unites us locally and internationally is at the heart of this Festival and is a celebration of its status as Twin Cities since 2002.

For diverse Scottish audiences to connect with Cuban film and filmmakers, celebrating the twin cities of Havana and Glasgow.

Eirene Houston is the director of the Havana Glasgow Film Festival. Check out their website for the latest info and follow them on their social media sites.