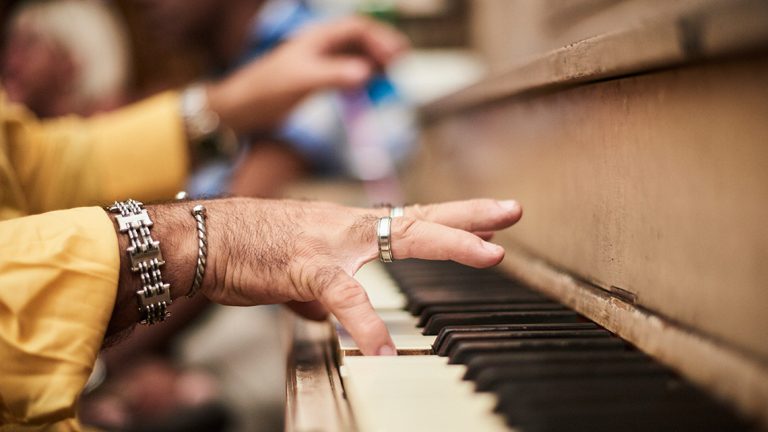 Havana’s hippest and coolest bars and restaurants are also cultural hotspots in their own right. True that there’s only about a handful of them (so far); but they are a must for any culturally-inclined cocktail lover who seeks a space in which not only drinks. Nibble and mingle but also soak up rich culture with history undertones and musical or artistic highlights. The places we name in this blog post are all of those things in one: atmospheric bars or/and restaurants, cultural hubs, art galleries, concert venues and history museums laden with memorabilia and nostalgic elements. Where to find them? Keep reading to find out.

Havana is one of those vibrant, happy-go-lucky places. Where residents like to mix it up and make the most of any occasion by throwing in as many fun. Exhilarating or otherwise entertaining or enriching experiences as possible. It’s not by accident that in real Cuban homes food is served on platters placed at the centre of the table. So that everyone can take a spoonful (or two) of everything, pile it all on their plate and mix flavours; by eating it all together, with each bite having bits of it all. In real Cuban homes there’s no such thing as starter and second dish; they all come at once and are usually served on one plate.

The dining and clubbing scene in Cuba is becoming a bit like this; a reflection of Cuban’s love to mix it all in. To not have to choose and enjoy themselves in eclectic places; that provide food, drink and entertainment in more than one way.

Havana’s five coolest, hippest bars, restaurants and cafes that are also cultural venues in their own right

This is why Havana has some of the most innovative, avant-garde venues that are bars, restaurants, cafés; art galleries, concert venues and museums all at once. Where to find them and what are they like? We proceed to list them and describe them.

This one we mention first because it takes the crown. It deserves the number one position. Simply because it is the only one to offer the combination of: bar, restaurant, art gallery (not just one, many of them with multiple exhibitions always on show), theatre and concert venue. Built on the site of a former oil factory; this place is the most cultural inclusive space in Havana. Uniting visual arts, photography, graphic design, architecture and industrial design, fashion, theatre, dance performances, concert halls and cinemas all in one. With a slogan that reads “All the arts under the same roof”; it defines itself as a great multidisciplinary lab. Exhibiting the best of Cuban contemporary art; with a special focus on the local community and a social approach. Its profits support community projects, mainly involving youth and children.

Nowhere in its description you read it’s a bar, restaurant or clubbing space. Yet it features no less than seven different bars and two restaurants; one tapas-style and another a gourmet venue serving up international flavours. They’re distributed along four “naves” (warehouses). Remember this is a refurbished and converted oil factory; it’s therefore huge and there’s a total of five of them. Each with at least one art gallery, a shop, concert hall or theatre space (with the only exception of Nave 2 whose theme is photography featuring 3 photo galleries) and access to stairs taking you to different levels where other “naves” are located. It supports Cuban art and local design and it’s where every Bohemian soul in Havana is, on a frequent basis.

Exuding romance through every pore this cosy tapas bar in Havana is every artistic soul’s dream hangout spot. It’s young and hip and cool, but also retro and nostalgic despite its forward-looking young vibe. Great hipster’s natural habitat and it has earned a reputation for offering the best cocktails in towns alongside really tasty tapas that are simply sublime. It’s also famous for being Havana’s most artistic café and as such it naturally attracts artists with Havana’s artistic crowds frequently seen here; from actors to dancers and filmmakers. There’s a grand piano onsite with live performances of all sorts (not just piano, live bands and soloists also make an appearance).

Café Madrigal was made to be enjoyed at night (opens from 6 p.m. to 2 a.m. Tuesday to Sunday) with an intimate atmosphere and low-lighting that softly highlights the original wall art (100% Cuban). The décor takes you through the history of Cuban cinema and beyond with relics like vintage gramophones, record players, brick walls, wooden furniture, original (beautiful) floor tiles – it all adds to the electric, somewhat enigmatic ambience. Visitors can choose from indoor and outdoor seating and the entire place is an ode to Havana, to Cuba and its history and culture. Did we mention it was also incredibly romantic? Do you really need further persuasion to check it out on your next Cuba holiday?

A legendary bar that had been closed for 48 years, the rebirth of Havana’s Sloppy Joe’s in 2013 caused quite a commotion in Havana and the world, now welcoming back weary tourists in search of a cooling libation and even some of its original customers before its closing in the 60s. Dating back to the 1930s, this a historic bar set in a historic building and it was Havana’s coolest bar for decades. All famous stars from Hollywood’s golden era were seen mingling here during their time in Havana (especially during the era of the prohibition in the U.S.). This is the very same bar that can be seen in the film Our Man in Havana, and where a deli sandwich sold in New Jersey for over 50 years now (the “sloppy joe”) is said to have taken inspiration from.

We kid you not!A quick glance at the pictures on the walls will show you Sinatra, John Wayne, Clark Gable all enjoying a drink here. Even when a fire destroyed part of the building in the 60s, conservationist’s efforts by the Office of the Historian of the City have managed to restore the look of its exterior to its heyday down to the sign hanging on the corner, right above its arches. As for the interiors, they had been preserved virtually intact for years, gathering dust but escaping termite infection. A deep clean and polish has restored it to its former glory, including its single-piece mahogany bar and outstanding photo collection of celebrities on the walls. A true original that combines history and culture after having been rescued from oblivion!

Hailed for being one of the best private bars in Havana’s nightlife scene right now, it welcomes hundreds of tourists and locals by the day and they keep coming back. The reason for its success? Firstly, there’s its raw authenticity with a simple, modern and minimalist décor with a joyful, Bohemian vibe. Then there’s the great value for money in terms of prices and the excellent quality of its drinks, cocktails and original concoctions. Described as Havana’s best hole in the wall, good music (techno style prevails but they do change it up), good food, great refreshments and authentic style are its recipe for success. It radiates joie de vivre, even if at times it does get packed. Then there’s its feel of exclusivity; being tucked away in an ordinary (hard-to-reach by car) corner of a run-of-the-mill building and its unassuming look.

Where if not for the loud, happy music you wouldn’t know this was a bar. Not at first. Its rooftop setting is cool and refreshing, walls with original Cuban graffiti artwork and photos. Located on the rooftop and looking European with a Cuban feel, most tourists fall in love with it, city dwellers do too. Most complain that there’s only one place like it in Havana when there should be a hundred more. It’s so popular, queues at the entrance are a common occurrence, so do come early in the evening (or late afternoon) or throughout the day. It’s great at any time, and the food they serve is plentiful, affordable prices and delicious!

Probably the hippest bar in this list and one most in vogue right now, this unique venue will cast its spell on you in a number of different ways. Simply put, there’s no other quite like it in Havana, it has that certain “je ne sais quoi” that’s so hard to put in words. From the moment you step into the old lift taking you to the rooftop bar, you know you’re in for a different experience, a timewarped one. The exterior might take you aback as it looks more like a derelict building whose wall paints are badly crumbling in places (bare bricks in others) and were it not for the big letters on the glass at the entrance, you’ll have no way of knowing where you are.

Bar Roma‘s rooftop ambience is hard to top with some of the best views of the city in the most original of ambiences. Let your drink rest on a makeshift table made of stacked bricks while you overlook fading lights in Havana’s skyline. All to the sounds of electrifying live music with DJs in session almost every night. In terms of entertainment, electronic music is king here with frequent live performances by emerging Cuban artists from Havana and beyond. This place is so cool it chills. Mind the goosebumps!

The best Cuban bars will have music, culture and art

Wherever you go in Cuba, music is a must, it’s part of the cultural experience. And if you’re eating or drinking in a bar and no music is in the background, you’re not at an authentic Cuban place. No real Cuban would go where there’s no music; and if it’s live all the better, that’s where Cubans like to be. If they can be surrounded by art while at it even better. Music is culture, culture is art and Cubans, especially “habaneros” adore both. Thanks to this post, now you know where to go to find the best combination of food, drinks and culture.