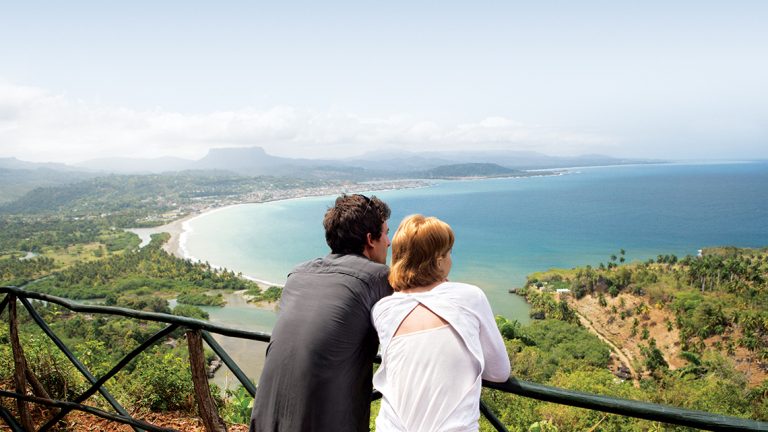 Welcome to one of Cuba’s real hidden jewels; Nuestra Señora de la Asunción de Baracoa – simply Baracoa to its many friends and admirers.

Here, in stark contrast to the arid south coast, lush vegetation and tropical flora envelop strange. Mythologically shaped mountains all over-looking Baracoa itself – a town quite comfortable; with its tag of the oldest settlement on the island. Down by the almost perfectly circular bay, the labyrinthine streets of 18th Century French columns and portals jumble together with eclectic. Ramshackle 20th Century façades, and Baracoa sighs comfortably into its easy-chair to begin another day.

Most attentive school-children would be able to recite the date that Columbus stumbled across the New World under the banner of Spain. Upon sailing into the bay of Baracoa in 1492, he wrote back to King Ferdinand and Queen Isabella fast running out of superlatives; to describe the riches he was encountering. In an entry into his journal, he penned: “This country, Most Serene Highnesses, is so enchantingly beautiful; that it surpasses all others in charm and beauty. I was so astonished at the sight of so much beauty that I can find no words to describe it.”

Just nineteen years later in 1511, conquistador Diego Velázquez officially founded Cuba’s first settlement on the same spot and the rest is very interesting history. Although Columbus and Velázquez may have been the first Westerners to fall captive to Baracoa’s charms; they certainly wouldn’t be the last.

People choose Cuba as a holiday destination for many reasons. But whichever reason has tempted you to investigate this isolated outpost of the island, make sure you don’t leave without properly seeing it.

Whilst the majority of visitors will focus on the North’s white sandy beaches, Havana’s chic, or the imperious Western valleys. The glamourous Baracoa offers sightseers is more complex. During your stay here, you can climb mountains, swim in cool rivers, sunbathe on beaches, even explore ancient Indigenous ruins, and sample the chocolate and coconut, the very smell of which floats on the breeze.

The atmosphere in the town is almost comically unique; fuelled by the evident eagerness. Which the town’s residents have to regale the tourists with tales of local mythology, improbable fables and revered legends. But basking in the glow of the tranquil evening sunlight, the meandering old streets and crumbling buildings take on an air of a painting by Johan Messely. Till all is suddenly beautiful, and tourists are left wondering from where all these luminescent colours so instantaneously emerged.

Adding to the shared sense of isolation one feels here; Baracoa has only been accessible by land since the mid-1960s when La Farola roadway was constructed. La Farola is an immense piece of engineering work, winding and climbing for well over 100 miles through stunning landscapes. And culminating in an astonishing climax on the final section by crossing the famous viaduct. Thus considered one of the Seven Wonders of Cuban Civil Engineering, it is a chilling journey of approximately two miles. Perched above steep mountain slopes.

A city of rivers between the mountains and the sea

Baracoa thrives on water. Sourced from the nearby mountains, twenty-nine separate rivers flow into this secluded area of Cuba; and because of this extensive hydration, Baracoa is fertile and lush. The surrounding hills burst with a myriad of different types of life; from chocolate trees and coffee bushes to all forms of wildlife. The world’s smallest species of bird, bat and frog all live in the Baracoa area.

Baracoa also boasts a number of beaches, from the calm and crystalline Playa Duaba, the white sands of Playa Maguana, the opposing black sands of Playa Baracoa, to the nearby Playa de Miel. Where fishermen cast their nets into the tranquil surf, resting against banana trees in the midday sun.

Guarding all it surveys from a distance of 10 kilometres, is El Yunque, an imposing flat-topped mountain shrouded in myth.

A local legend has it that on a clear day; so if you look closely at El Yunque from Fortín de La Punta in the city of Baracoa you can see the faces of José Martí and Antonio Maceo, heroes of Cuban independence.

In fact, viewing Baracoa below from the summit; nestled against the azure ocean and surrounded by the Toa, Yumurí, Miel and Duaba rivers. All enveloped in the emerald green vegetation of palm trees and thick forest; must be how the Earth once looked before various human civilizations left our ruinous marks on it all.

Fittingly, at the top, there is a bust of the aforementioned Cuban Independence hero Antonio Maceo. Rightfully resting in one of the most beautiful landscapes of the land he loved.

Trekking and hiking in Baracoa

For the more energetic holidaymakers, there are organized hikes to the top of El Yunque. And specialised guides will lead the intrepid climbers through the majesty of this unique landscape; past cascading waterfalls, to rest upon the top of the mountain. Where the surrounding panorama must be seen to be described.

Round trips to the top and back take about four hours; as you wind through tropical palm trees and the plethora of extensive vegetation that characterises this area. The road can be muddy in certain sections; so it is advisable to wear the correct type of strong footwear. Also clothing for this type of activity.

After you’ve finished your descent, you can plunge into the pools under the magnificent waterfalls by the Duaba River. Serving as a natural spa of crystalline waters; you can cool and refresh yourself after all the physical exertion of hours trekking.

One of the most interesting experiences of hiking along the Duaba River; is the option to eat all the fruits you find for the price of only 1 Cuc. There is a wide variety of fruits. And it is common to find oranges, grapefruits, tangerines, bananas, carambola, coconut, mango, guava, melon and pineapple. All dotted along the way like helpful water carriers at a marathon refreshing the runners.

El Yunque is deeply entrenched in modern Cuban identity, but dates back from long before the Spanish came. Dating from time immemorial, it was declared a National Monument in 1980 for being an extraordinary site of natural beauty. And every one of its 575 metres exhales a majestic stillness where people can go to find peace and solace.

Things to explore and see in Cuba’s oldest settlement

There’s an old adage that states “good things come to those who wait”; and when the long journey has been completed, there’s definitely a feeling of satisfaction. Once reaching this wonderful city that Time wished for so long to keep a secret.

Because of the wealth of choice, each visitor to Baracoa has their own preference. There are those who prioritise feasting their eyes on the city’s natural beauty; others its cultural appeal and then those who wish to delve into its historical wonder.

For visitors interested in the acculturation of Indigenous Cuba; maybe the first place to visit in Baracoa must be the Cruz de Parra Church in the main square. It is rare that Faith, History and Culture all link hands under one roof; but inside the church, that is exactly what you can sense. Built by Christopher Columbus on 3rd December 1492.

The cross found inside the church is the only one remaining from the 29 that the Genovese explorer placed; throughout the Americas on his quests to discover new lands. Just one of the city’s many legends is that in ancient times of drought; by processing through the city holding the cross aloft. Plentiful rains would fall and the townspeople would be saved. In one of Cuba’s most lush and hydrated micro-climates, it’s not exactly credible science; but it is considered the oldest remaining religious relic from when European and American cultures encountered each other over 500 years ago. And wherever you stand on the theological scale, it is well worth a visit to see.

When Christopher Columbus eulogised what he saw from the bay as “the most beautiful land that human eyes ever saw”. He could well have been looking at the Alexander Von Humboldt National Park. It is a truly astonishing place. Named after the German scientist who visited the island in 1800, then declared a World Heritage Site in 2001. It’s the largest biological reserve in Cuba; and of the 28 plant formations defined on the whole island, 16 are in this impressive park. Visitors can see various species of parrots, hummingbirds, lizards, and large rodents called Cuban solenodons; only found on this magical island. What stand out the most however, rather surprisingly, are the snails; proudly labelled by the locals of Baracoa as “the most beautiful snails in the world”. These tiny multi-coloured molluscs are amazing to behold insofar as their beautiful shells are completely unique, unlike any other snail.

Every hue under the Cuban sun can be seen on the intricate swirls on their shells. And it looks as though a group of school children have spent an afternoon happily painting them. If you visit the Cueva del Paraiso, or the temptingly named “Cave of Paradise”; a museum composed of three underground caverns, you can see collection after collection of these attractive snails.

Cueva del Paraiso The cave itself is composed of three underground caverns where the ancient Taino people indigenous to the island once inhabited. Inside the caves, you can admire typical Taino villages, statuettes, ceramic vessels and other archaeological findings found exclusively in this area, all which attract the attention of curious scholars and visitors every year.

And if you’re a chocoholic…!

One of the most emblematic culinary attractions of Baracoa is cocoa; due to the large number of plantations in the area. The resulting product, chocolate, forms the basis of the local economy. To the point that in many places in the city a strange mixture of sea air and chocolate can be perceived. La Casa del Cacao (The Chocolate House), although sounding more like a part of Hans Christian Andersen‘s imagination; is definitely worth visiting. You can savour creamy ice-cream or choose a wonderful hot chocolate. Or even a milkshake with crushed ice, while being serenaded by the haunting traditional melodies of Cuba. The process of making chocolate in Baracoa hasn’t changed since the way the French families; who settled in the area between 1781 and 1804 used to do it. Rarely is it seen that such an archaic and unchanged process can produce such a delicious result.

Baracoa, yet another dimension Cuba has to offer

Baracoa’s isolated location which has kept it untouched by Time for so long, is now its charm. Only accessible by road for the last 50 years and emerging into the 21st Century both ancient and fresh. If you visit the island of Cuba, a novel in itself, make Baracoa one of the chapters.

With so much see in the city, and even more to see in the surrounding area; this Eastern part of Cuba can take a week to properly experience everything it has to offer. And it would be a great shame to hurry a trip here and not give it the time it deserves.

Although it suffered heavily from the onslaught of Hurricane Matthew at the end of 2016; which left parts of the city damaged, the spirit of the locals has restored its natural splendour. Reinforcing the attributes that make it so essential to visit.

I assure you that you will never regret it. The natural beauty, the preservation of its heritage and cultural values; and its history all make Baracoa a truly unique place. Much has been written about Baracoa, ever since the Spanish founded it over 500 years ago. But people will be writing about it every day, because it is a city discovered afresh every day – even by the unique people that live there.