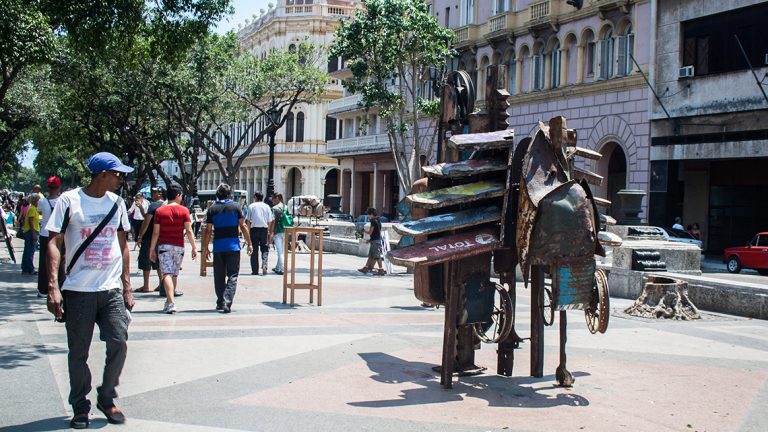 Long hailed as the epicentre of Cuban culture. In fact, Havana is as multi-layered, multi-dimensional; and multi-coloured a city as you can get. It certainly has amazing cultural highlights in many forms, expressed in many different ways. From eye-catching architecture to endemic rhythms, dances, festivals, and a buzzing artsy vibe. And yet it manages pack a few unexpected surprises along the way. Read on to find out where and how to find the best of Havana’s vibrant culture.

There is a reason Havana has graced many recent fashion front covers; and featured in many travel magazines’ front pages. It has also starred in compelling photograph exhibits around the world. And been the inspiration of numerous coffee table books. The Dogs of Cuba and The Cats of Cuba are the latest example but recent publications also include Habana Sensual. Documenting Cuba’s talented ballet dancers captured on the streets of Havana while making dance leaps and pirouettes. That’s without counting the numerous publications and TV documentaries. All inspired by Cuba’s impressive fleet of classic American cars; plus the resilient, imaginative mechanics behind them.

Havana was the inspiration for Karl Lagerfeld’s Cuba Cruise 2016/17 fashion collection; which debuted right on Havana’s scenic streets with an impressive A-list entourage. And on the occasion of its impending 500th birthday; what could be better than discovering it through some of its most colourful cultural events?

Where to find Havana’s vibrant culture, you ask? A more apt question would be where not to find it. As Havana is bursting with culture and character, exuding personality in every pore. There’s a lot of culture in Havana and it’s around everywhere you look. But it’s even better when you know the places where you can scratch beneath the surface and soak it all up. Allow us to illustrate.

If you want to find the perfect history and culture blend in Havana; the following are two of the best places in which to immerse in timeless culture that transcends centuries.

The global prestige of Havana-based Ballet Nacional de Cuba has made waves throughout its more than 70 years of history; and earned praise in every corner of the world. Its headquarters on the Cuban capital is the Gran Teatro de La Habana “Alicia Alonso” ; (named after the prima ballerina who founded the company). A magnificent piece of architecture all on its own. Visiting it will mean ticking off an indescribably beautiful cultural landmark; often flanked by neatly parked classic 50s cars, making for incredible photo ops. But enjoying a ballet performance here will be the cherry on the cake. Check its online calendar before arrival in Havana, if you’re in luck you’ll catch one of their seasonal programmes. But be prepared to queue for tickets at the theatre’s ticket office (no online booking, I’m afraid!).

The Havana Fine Arts Museum (or Museo de Bellas Artes de la Habana) is a grand building of grandiose beauty. Like the Gran Teatro, you’ll find it in Old Havana. And it hosts the finest Cuban and international art collections of all times. From the colonial period right up to more recent generations of artists. It’s an unmissable mecca for any culture lover; and the best place to start getting acquainted with Cuba’s artistic styles and art history.

From classical to contemporary art; these are some of the best galleries in Havana to soak up the city’s multi-dimensional character and flavour. You’ll find everything, from a mix of Cuban classics; and contemporary artworks in the old part of the city to the most avant-garde spaces in downtown Vedado.

One of the official headquarters of the Havana Art Biennial, this is more than an art gallery. It’s one of the island’s main cultural institutions and it lives up to its name; paying tribute to legendary Cuban artist Wifredo Lam. A man of mixed Chinese and Afro-Cuban heritage who depicted his roots through his unique paintings. The aim of the gallery, founded in 1983 is to promote visual arts; developing countries in Latin America, Africa, Asia and the Caribbean. And it has international fame as well as an amazingly centric location next to the Havana Cathedral; just a few steps away from La Bodeguita del Medio.

Photography lovers will find in this place the best in which to admire Cuban (and international) photo art. With regular exhibitions that change monthly or bimonthly. But it’s not just about the contemporary exhibits, Fototeca de Cuba also houses the country’s most valuable photography archive. Hosting permanent exhibition halls showcasing the island’s most significant photo treasures. So it’s definitely an obligatory stop to immerse in Cuba’s photography culture.

With a decidedly contemporary and forward-looking vibe; this art venue promotes experimental, innovative art pieces that explore new areas and dimensions of artistic interpretation; by emerging as well as established artists. It has two big salons: one that exhibits the winners of a yearly competition at the Salon de Premiados hall; and the Contemporary Cuban Art Salon, which seeks to reflect on the routes of Cuban art through differently themed editions. You’ll find it well located on a corner of Plaza Vieja.

One of the newer Havana art spaces; certainly has quickly earned a solid reputation among both local and international art enthusiasts. Villa Manuela is a popular gathering point for art critics and lovers of contemporary Cuban art. It doesn’t have a license to sell art, which means you’ll find truly unique exhibitions; with a mix of styles through different generations. Art shows are celebrated roughly every month. So you can look forward to as many as 10 to 11 per year.

The oldest of art galleries in our list; no cultural tour to truly appreciate Cuban art would be complete without a stop here. Founded in 1962 this is one of the city’s best art spaces, for many a reason. All internationally famous Cuban artists have showcased their work here (from René Portocarrero to Amelia Peláez and Wifredo Lam). This is also the headquarters of Subasta Habana; an annual art auction that has been gaining popularity every year and significantly contributes to promote Cuban art.

This is the place to come to and get acquainted with the most talented young Cuban artists of the moment; as the gallery is devoted to showcasing and promoting art pieces from emerging names. The exhibits are periodically changed every three weeks or so. And the art gallery is one of the main attractions found close to the John Lennon Park.

Havana is a place that loves an excuse for a party, a gathering or get-together whatever the occasion. With habaneros being known for their fondness of improvising impromptu street parties; whenever the music takes over them (hint* if happens frequently!). When it comes to cultural festivals and events Havana doesn’t disappoint, and here are some of the main ones.

Cuba’s biggest and most international art celebration takes place in Havana every two years. Artworks are displayed right on the streets to blend in with the various (contrasting) cityscapes. Stand out against the decaying architecture. Merging against the backdrop of well-preserved historic buildings; bring life and colour to neglected corners and generally transform otherwise ordinary streets and sidewalks. The Havana Biennial is a platform for many international artists, especially Cuban and Latin American ones; who submit their works annually and arrange elaborate installations and exhibitions throughout the city.

Cuba’s oldest cultural festival is dedicated to the cinematographic arts and brings a wide variety of mostly Latin Americans; but also international filmmakers and actors from all corners of the world to Cuba. Held every year in the month of December; the festival, whose full name is Havana’s International Festival of the New Latin American Cinema (Festival Internacional del Nuevo Cine Latinoamericano de La Habana). Calls on filmmakers to compete in a variety of categories and battle it out for a total of 40 awards.

International Hollywood stars and directors from Benicio del Toro to Michael Moore, Sean Penn and Matt Dillon; have all descended in Havana to catch the festival action. Therefore if you want to enjoy some of the film screenings; months ahead of the festival you can purchase a “passport” that gives you access to seven different events. These can be purchased at the ticket offices of Havana’s participating cinemas.

Havana’s International Jazz Festival, also known as the International Jazz Plaza Festival. Takes place in the Cuban capital every January, typically in the second half of the month. And usually over the course of a week. Giving festival-goers around 6 days of live Latin jazz action at a number of participating venues throughout the city. With global Cuban jazz icons like Chucho Valdes and Omara Portuondo presiding the event; and the participation of emerging talent from Cuba and the world. This is an event no jazz lover can afford to miss! Many even plan a Cuba holiday around it!

Culture in Havana everywhere you go

No other place in the world can compare to Havana. There’s no other city that while economically poor bursts with so much culture; pride, historic awareness, and beautifully preserved timepieces. Nostalgia lives on in Havana like nowhere else in the world; and it’s not just about the eclectic architecture and the classic cars. It’s also about a strong identity, intoxicating rhythms and mixed Afro-European-Caribbean roots. It all comes alive through cultural events; and culture hubs like the ones we’ve mentioned here. Though not the only ones in Havana, they’re some of the best. And they can certainly enrich a culture-full Cuba holiday in more ways than one!