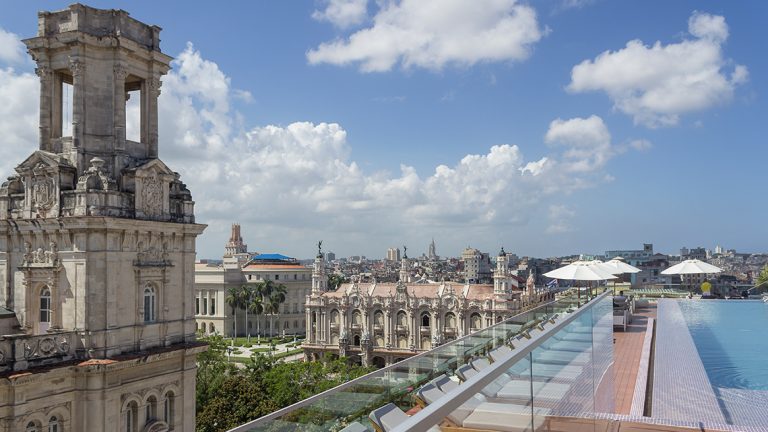 European luxury first dawned in Havana with the opening of Kempinski’s gleaming Havana hotel; the much acclaimed and revered Gran Hotel Manzana Kempinski La Habana. Now that the Swiss hotelier is soon opening a second upscale property in Cuba; this time in a privileged beach destination. The time is ripe for a luxury twin-centre holiday combining Havana and Cayo Guillermo; one that could steal the crown from the popular Havana+Varadero luxury holiday combinations.

Ever since Kempinski ventured into the Americas with its first signature hotel in Havana; Cuba’s standards of upscale accommodation have never looked back. A new benchmark was set and the bar is high. The level of heightened luxury that the Gran Hotel Manzana Kempinski La Habana offers continues unmatched in the Cuban capital. And the Swiss hotel chain has followed up with another hotel opening in Cuba; this time in the blessed key of Cayo Guillermo, thus creating the perfect excuse for a Havana+beach luxury Cuba holiday.

When the Kempinski brand landed in Cuba, the world was watching. That such a prestigious boutique hotel chain would choose Cuba of all destinations; to make its debut in the Americas didn’t leave anyone indifferent. They took a giant leap of faith by choosing Havana as their first ever city in the Americas. Bringing the brand from one half of the world to another; and choosing to land in Cuba makes the experience of a stay in Kempinski’s Havana hotel all the more exclusive. You know that the only place where you can enjoy Kempinski’s signature service and boutique style in the Americas is Cuba. Only in Havana, Cuba (so far). And instead of branching out and opening more hotels elsewhere in the Americas after their Havana debut; they’re following up with not just one more hotel opening in Cuba, but two!

After the success of the Gran Hotel Manzana Kempinski La Habana; whose level of bespoke service and luxury remains so far unmatched in the Cuban capital and elsewhere in the island. The Swiss hotel chain is betting on Cuba once again and putting more eggs in their Caribbean basket. They’re doing so with the impending launch of the new Cayo Guillermo Resort Kempinski; their first ever beach resort in the Americas in one privileged location.

Cayo Guillermo is a tiny little islet off mainland Cuba. It’s right in the middle of the island; off its northern shore and part of a bigger archipelago known as Jardines del Rey. Cayo Guillermo is Cayo Coco’s little northern sibling; and given its smaller size it feels more remote and isolated than the former. While Cayo Coco is the bigger, more populated (by just resorts though, no one permanently resides here) of the two; Cayo Guillermo is a more secluded and intimate haven.

It’s easy to reach by road from the causeway that links it to Cayo Coco and, which; at the same time, links Cayo Coco to mainland Cuba’s town of Moron in the province of Ciego de Avila. That’s not the only way to reach it though; as there are regular domestic flight connections linking Havana to Cayo Coco. And once there all you need is a shuttle or boat trip to reach Cayo Guillermo. It’s pure heaven on earth.

While Kempinski’s latest Cuba property isn’t ready to welcome visitors yet; (it’s due to open in the first quarter of 2020). It already has an official website, full of dreamy images that indeed make it look like paradise. Beautifully positioned on a secluded stretch of stunning Playa Pilar beach; the new Kempinski Cayo Guilermo will feature wooden overwater villas. With plunge pools with standard room accommodation also available in low-rise three-story blocks of buildings.

This is a place created for utter relaxation with maximised sophistication and bespoke attention to detail. Self-described as a “unique, one-of-a-kind resort”; the new beachfront hideaway will offer “an authentic Caribbean experience”. Drawing inspiration from Ernest Hemingway’s love for the Cuban keys, the virginal islets he frequented on fishing trips.

Never mind that there are just six other hotels in Cayo Guillermo; thus adding to the exclusivity factor – the real bonus is that while most other properties in the key line its eastern coast. The new Kempinski will be far removed from the rest, located at the tip of one end of the island. Pure bliss!

Havana’s Kempinski hotel is without a hint of a doubt one of the city’s best and most luxurious five-star hotels. And the Swiss brand’s new Cayo Guillermo property expects to enjoy the same level of success in this new part of Cuba; thus creating the perfect ultra-luxurious combination for those who seek premium comforts. When combining a chic stint in Havana with an utterly indulgent and relaxing beachside break on a virtually deserted island. All with Kempinski’s trademark services and superior facilities; from mouth-watering gourmet restaurants to sublime spas, exquisite design and dramatic infinity pools.

Poised to become the new rivals of the Havana + Varadero route (the most popular twin-centre in Cuba). The most discerning travellers will find the new Havana + Cayo Guillermo holiday combination by Kempinski a tough rival to beat in terms of exclusivity and glamour. No other brand in Cuba exudes as much luxury and distinctive boutique style. Contemporary elegance at its finest.

Not content with being about to open its second hotel in Cuba. Kempinski is really going all out; and getting ready to welcome its third hotel in the island and its second in Havana. And this one is expected to open before the year ends! The new Kempinski Gran Hotel Bristol will be located just two blocks away from the first Kempinski on Manzana de Gomez. With the Swiss hotelier having chosen the same location in the heart of Old Havana; the most storied and picturesque part of the Cuban capital. Which, by the way, is also turning 500 years old this November. Kempinski wanted to be part of the special occasion and planned this latest opening to coincide with the city’s 500th anniversary celebrations. No doubt, it will instantly become another point of reference in Havana for upscale luxury accommodation and exclusivity.