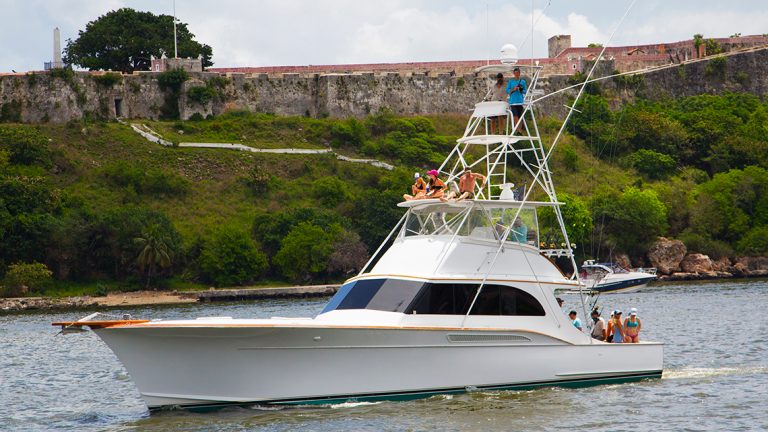 Because of the warm Antilles current that flows north-easterly past the island chain that separates the Caribbean Sea and the Atlantic Ocean, there’s an abundance of tuna, barracudas, parrotfish, sawfish, bonefish, cherub fish, catfish, dogfish, the Cuban gar, emperor fish, and last but not least – marlin.

This impressive roll-call of marine life means that deep sea fishing in Cuba has become a popular past-time for Cubans and tourists alike, with more and more travellers signing up for the experience.

The clear benefit of choosing to go deep sea fishing in Cuba however, is that there are still far fewer people here than in Florida or many other Caribbean destinations, where its popularity has resulted in long waiting lists and crowded boats.

It’s worth pointing out that fishing in itself is obviously not a new phenomenon. It’s impossible to gauge just how long people have been throwing nets and hooks over the sides of boats or standing in the surf while brandishing a sharpened spear, hoping to spike some dinner. We can safely assume that fishing is one of Homo sapien‘s oldest tricks.

What is true however, is that it’s specifically deep-sea fishing in Cuba its becoming the catch of the day.

But, what is deep-sea fishing anyway?

Just to establish exactly what deep sea fishing is, it’s the type of fishing that requires a trip out into the deep waters of the sea or ocean. The water depth should be at least 30 metres to be deemed deep sea fishing; and the technique to be used is generally considered more of a sport than regular fishing.

By going out so far from the coast, the angler is exposed to a wide variety of deep sea fish. Those are not available in shallower waters. These fish are entirely different from routine shallow water fish. When fishing in depths of 30 metres, it’s common in Cuba to find tuna, sharks, swordfish, or marlin to name a few.

In order to catch any one of these bigger deep sea fish, anglers normally use flexible poles measuring five to six feet in length made from metal or plastic, luring the fish in with natural or live bait like mackerel or chunks of tuna.

Does it sound tempting? You’d be in good company, and Cuba is the perfect place!

The old man and the sea

American author Ernest Hemingway immortalized the romance and excitement of deep sea fishing in his short novel “The Old Man And The Sea” in 1952.

Nowadays, visitors to Cuba can follow in the great writer’s footsteps by signing up for excursions organised by the travel agencies. These operate at numerous marinas around Cuba’s coastal communities and beach resorts, but mainly in Havana and Varadero.

For example, the aptly named Marina Hemingway in Havana is perhaps the most popular. Place with tourists simply because of its name and the fact that it holds a highly prestigious annual marlin fishing tournament.

Held every year since 1936 and inspired entirely by Hemingway; participants are scored according to the number of marlins captured each day. Then, the victorious boat on three occasions of the five days of competing will be declared the winner.

It’s worth noting that it’s strictly a “tag and release” tournament. Where the fish are caught; and the angler attaches a tag to the fish recording specific data such as date, time, place, and type of fish. As the name suggests, the fish are then released.

This information is then submitted to a fisheries agency or conservation organisations. Anglers who catch a fish that’s already been tagged must report their location, date, and time, as well as the tag number.

Interestingly, this tournament is the oldest in the world in this specific category . And due to the number of fishermen it attracts, is actually the main angling event in the whole of Cuba.

The 60th Ernest Hemingway International Marlin Fishing Tournament was dedicated to the 50th anniversary of the first meeting between Fidel Castro and the famous American novelist.

Held at the Marina Hemingway, in 2019 more than 130 fishermen from 20 different countries gathered to participate in the event. Winning this time the Spanish team on the yacht “El Pilar”.

What was the name of Hemingway‘s boat originally?

Evidence that a very scientific world based on the theories of Physics and the rules of Mathematics still has time for romance; or simply real-life poetic license that Hemingway himself may have dreamt up in one of his novels?

You decide – but remember:

“Somebody just back of you while you are fishing is as bad as someone looking over your shoulder while you write a letter to your girl.”

Are you thinking of going deep-sea fishing in Cuba? – Here are some of our tips

Deep sea fishing can be difficult. But both experienced anglers and novices can benefit from this simple advice; in the form of some sensible tips. Here’s what our experts recommend:

Deep sea fishing in Cuba, a healthy exercise in a Caribbean idyll

The island enjoys an idyllic climate and can offer some of the finest deep sea fishing excursions anywhere on the planet.

There are numerous marinas and we’ve assisted hundreds of travelers with recommendations and bookings for the most amazing deep sea fishing experiences in the azure waters surrounding the Cuban archipelago. It’s a genuinely authentic event, and it’s unforgettable.

The crews have developed a reputation as some of the best in the world at chasing down deep sea marlins. As their experience harnesses the best spots, the appropriate bait, the perfect speed; and the correct time of day to succeed.

Sailing on a boat in the Caribbean Sea is a highly tempting activity in itself. So come and catch more than your dinner in Cuba! There’s no time like the present; and whenever waiting for a fish to bite is involved – there’s no present like time!