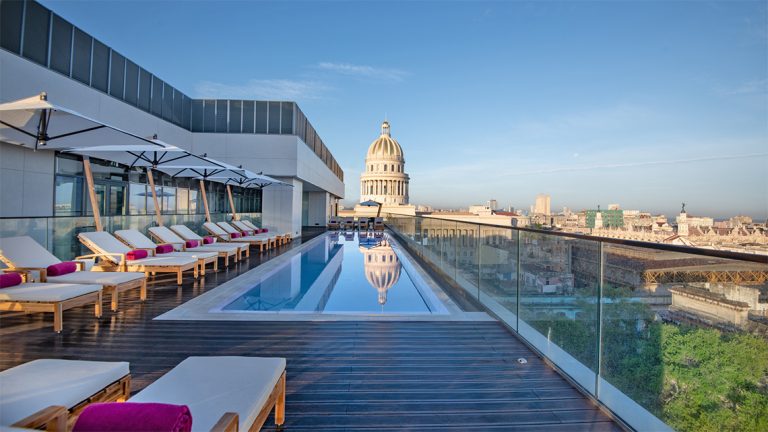 Havana’s high-end hotel renaissance is in full swing with prestigious new properties. Springing up around the city’s Paseo del Prado promenade in the last couple of years. As luxury hotelier Kempinski debuts its second hotel – the Gran Hotel Bristol – in the city, the transformation is finally complete.

Havana is officially in the midst of a luxury hotel renaissance. With five-star properties finally finding a firm foothold in the city. In recent years, a quartet of high-end hotels have sprung up in prime locations around the Cuban capital’s grand Paseo del Prado promenade. Right on the edge of heritage-listed Old Havana. The area has fast-become the city’s luxury hotel district.

Leading the pack, luxury hotelier Kempinski opened the Gran Hotel Manzana Kempinski La Habana in June 2017. While Iberostar opened its flagship luxury hotel in Havana the Iberostar Grand Packard 18 months ago. The newly-built SO/ Paseo del Prado La Habana soon followed, debuting just in time for Havana’s 500th-anniversary celebrations in 2019. The preparations for which saw aesthetic and infrastructure improvements across the city including the restoration of the golden-domed Capitolio building.

As Kempinski opens a sister-hotel to the Grand Manzana – the Gran Hotel Bristol – the transformation of Havana’s heart is finally complete.

A new star on the scene

For decades the accommodation choices in Cuba’s colourful capital have been limited. But a series of deals with luxury hotel companies are now leading to the conversion of grand old buildings in the centre of Havana into chic hotels run by world-renowned brands.

Widely-recognized as one of the finest hotel groups in the world, Kempinski was quick to see the potential for a true luxury hotel in Havana after it was declared one of the New Seven Wonders of the World. With more and more tourists flocking to the city, the company first decided to revive a former city landmark. Converting – the Manzana de Gomez – a European-style shopping mall dating back more than 100 years, into the Gran Hotel Manzana Kempinski La Habana.

Following the success of Manzana Kempinski, the high-end hotel group made the decision to add another glamorous hotel to the city. The Gran Hotel Bristol, unveiled to guests this Spring 2020. At close quarters to Havana’s famous gold-domed El Capitolio, the hotel sits inside a historic building. On the edge of atmospheric Old Havana, just two blocks from its sister flagship hotel.

The handsome Spanish colonial structure has been fully restored to its former glory. As a thriving hotel that was at the centre of Havana’s social and artistic scene in the days before the Cuban Revolution. A symbol of the old bohemian life of Havana. The hotel then offered unusual comforts for its time such as private bathrooms and telephones in each room. Similarly, the new incarnation aims to be a step above its contemporaries.

While the original façade of the building has been preserved. The interior design actually reflects a modern take on its 1930s Art Deco heyday. With 162 stylish and bright rooms and suites with clean lines and fine furnishings, plus an opulent Presidential Suite. Each room has the usual mod cons – flat-screen TVs and an individual control panel to manage lighting, climate and entertainment. Complimentary Wi-Fi is also available throughout the hotel, which is still something of a luxury in Cuba.

As it debuted to the public in early March, new General Manager Thierry Brinte said that Havana’s rich and vibrant cultural landscape was the biggest inspiration for Kempinski Gran Hotel Bristol. He explained:

“The transformation of this stylish new hotel was truly a labour of love and dedication. Our guests and residents will immerse into an exclusive lifestyle experience. Where relaxed urban vibes and culinary mastery breathe new life into this historical building.”

In homage to the city’s remarkable history, the hotel’s clutch of five restaurants and bars. Taking their names from some of Havana’s most iconic landmarks including the graceful El Capitolio. Which can be gazed upon from virtually every room. Offering the best possible views, El Capitolio restaurant it is at the top of the building. Serving casual breakfast and dinner al fresco on the rooftop terrace or in an airy light-filled indoor space.

Meanwhile, another restaurant named El Diamante in a nod to the diamond that marks the start of Cuba’s first national highway. Also boasts panoramic views of Old Havana. The relaxed eatery serves light Latin tapas throughout the day. With a live DJ setting the mood for cocktail hour overlooking the pretty night-time cityscape.

Unmistakably Cuban, the Pasos Perdidos lobby bar has its name after one of El Capitolio’s most illustrious halls. Which also shares its name with one of Cuban writer Alejo Carpentier‘s most renowned novels. Open throughout the day, it serves traditional Cuban breakfast with a freshly brewed cup of Cuban latte. While the highlight of its lunch menu is a healthy and nutritious Poke bowl made with locally sourced ingredients. As night falls, it doubles as a hip hangout for an indulgent nightcap.

Havana’s half-millennia-old defensive walls, fragments of which can still be seen nearby are commemorated at the hotel’s soon-to-be-opened Las Muralla Club. Offering unfussy food and live jazz to reflect Havana’s ambient evening vibe. The menu will feature traditional and creative burgers. As well as chicken wings complemented by a wide variety of beers and crafted cocktails.

But perhaps the hotel’s crowning glory is the rooftop infinity pool, bar and terrace on the ninth floor. During the daytime, guests can soak in the tropical sun on a sumptuous lounger. Or float in the pool with the iconic landmarks of the Caribbean’s coolest city in full view. Romantically lit at night, the terrace bar has panoramic views of the city’s skyline from El Capitolio to Old Havana and the port. Serving hand-crafted classic Cuban rum cocktails such as Daiquiris and Mojitos. It will certainly become one of the best spots in the city for an evening drink.

Leading from the seafront Malecon up into the huge leafy square of Parque Central. Paseo del Prado is the perfect locale for the city’s luxury hotel district. Some buildings are yet to be beautified, its wide central walkway shaded with cedar trees and lined with old marble benches. Also with colourful ornate buildings make it one of the most handsome streets in Havana. And the UNESCO heritage listed district of Old Havana is just a stone’s throw away.

Kempinski’s first Havana hotel, the Grand Manzana, forms the centrepiece. The façade of the grand old building was completely restored. While the interior was transformed to include 246 deluxe guest rooms and suites with high ceilings, French windows and classic upholstery. A clutch of fine dining restaurants serve everything from afternoon tea to gourmet seafood. While a world-class spa offers guests a soothing sanctuary in the city.

Luxury travellers who want to combine a Havana city break with a stylish beach escape won’t have to lower their standards in Cuba. Where Kempinski has its third island hotel – Cayo Guillermo Resort Kempinski on one of the paradisiacal northern cayes (or keys). Perched above the white sands of palm-tufted Playa Pilar, the beach is named after Ernest Hemingway’s fishing boat “Pilar”. Which often plied these gorgeous opalescent waters.