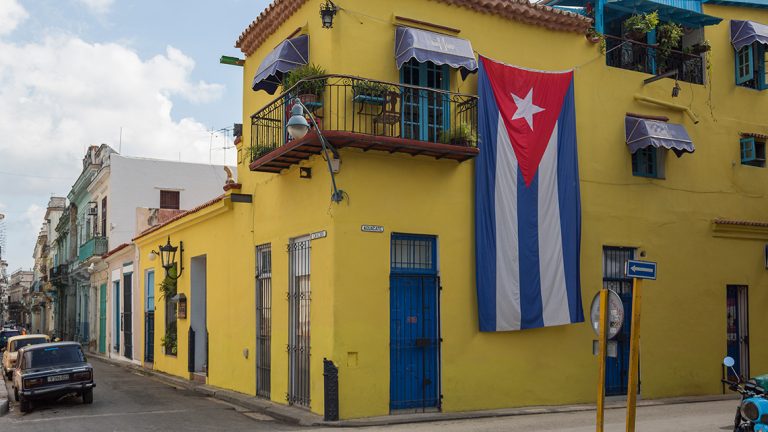 Cuba is politically, culturally, historically and geographically, a fascinating place. Travellers have been coming to this Caribbean paradise for centuries and leaving tiny parts of their own cultures. All of which have contributed to a melting-pot that astounds and astonishes.

However, it’s always been the case that people have never really been able to add the adverb “gastronomically” to the above list. Truth be told, Cuba was never gastronomically fascinating. Despite the European, African and even Asian influences that have all left their marks here. Cuban cuisine has always been, well – simplistic.

Not anymore though. Havana has a reputation as a real upcoming hotspot for foodies and gastrophiles and it’s only getting better. This is in large thanks to a new generation of passionate chefs who have embraced “food fusion”. Amalgamating traditional Cuban cuisine with food from all over the world.

One of these very people is Ivan Rodriguez Lopez. So, who is he, and how is he revolutionising people’s taste buds and mentalities?

How did this gastronomic revolution start?

First things first though. Just how did a whole nation undergo this food-related shift? It used to be that when scouring the “paladares” and restaurants around Havana, Cienfuegos, Santiago de Cuba, or any other developed city on the island. Most people with rumbling stomachs had always been left choosing between had and cheese baguettes for lunch and a combination of rice, pork and beans for dinner. At least the “Mojitos” made up for it.

Not anymore. Since 2011, when the Cuban government introduced reforms that coincided with improved relations with the US, more fresh and original ingredients were allowed into Cuba. Thus becoming readily available to chefs as well as more affordable to everyone in the street markets, and a gastronomic renaissance was born. Cubanos and “yumas” (foreigners and/or tourists in Cuban slang) alike demand and expect their palates to be challenged in Havana these days. Something which “paladar” Ivan Chef Justo is only too happy to oblige.

The one problem with Ivan Chef Justo

Someone once quipped that the only problem with the restaurant Ivan Chef Justo, is trying to describe to people how to get there.

It would be easier if they decided on a definitive name too. Although it currently runs by the names of its owners, Ivan and Justo. There’s talk it may change to “Aguacate 9”, which, being its address, would at least help hungry tourists find it more easily.

Nevertheless, when you find it, it’s worth the hunt. It’s a beautiful building that slots right into the style of colonial Old Havana. In charming Cuban fashion, the old building from 1766, is painted yellow, as bright as a lemon. Which adds to the light-hearted ambience within.

The decoration fills every space on the walls. In what seems to be an attempt to cover the whole structure in its broad personality. Pictures of Old Havana, colourful art, black and white portraits of Hollywood film stars, patterned plates. The wide range of styles seems to be a metaphor for the fact this restaurant caters for everyone.

Then there’s the food. Ivan himself says that his motivation in life is to make the same great food for his clients as he would serve to his own family.

Regarding cooking for the clientele, he goes one further;

“We like to mix this type of international cuisine with Cuban cuisine and making a brand new, unique type of dining experience called ‘Cuban Fusion.’ We want to show the world that when they come to Cuba, they can experience a multinational taste.”

Food fit for a king

It’s a humorous cliché amongst the staff in restaurants that they should always ask themselves whether the food they serve is good enough for royalty. For most restaurants, the actual opportunity to put this to the test doesn’t come around very often. Rather interestingly however, for Ivan Chefs Justo, this is exactly what happened.

In November 2019, King Felipe and Queen Letizia of Spain decided that it was here at Ivan Chefs Justo that they wanted to have lunch. Specifically, they chose to eat crab salad and Ivan’s famed roast pork.

What’s more, the Queen was noticeably delighted that the meat had almost no fat on it. It’s a well-known fact that the Cubans have been eating pork since time immemorial. And some live to be one hundred years old!

That’s not Ivan’s only claim to fame though. Other customers have included stellar names like Paris Hilton, Will Smith, Penelope Cruz and Javier Bardem. People from all walks of life appreciate the humility Ivan shows, combined with his passion for preparing the best food possible.

This is healthy food, expertly prepared and definitely fit for a king.

Staying one step ahead of the game

When so many other places in Havana have upped their game and the city’s genuinely enjoying a new-found reputation as a “gastrohub”. Part of Ivan’s challenge is staying one step ahead.

Staying honest and staying original seem to be the best ways of doing this, and that’s reflected in the relationship he forms with his suppliers.

“By working with fresh and local products, I’ve had to build strong relationships with local farmers. Now I have something that almost no other paladar in Havana has and as a result, my menu just became that much better.”

It’s not just about being original though. It’s also about being savvy with what ingredients are in season to harness foods at their peak, as Ivan explains.

“The potato harvest started about two weeks ago, so there are several dishes based on that. However, don’t look for mango or avocados in your salad until later in Spring, as they are not in season yet.”

After listening to him speak about exactly when to use a specific ingredient, and how he has worked tirelessly to forge relationships with trustworthy suppliers. You get the impression that Ivan marries together gastro-science with being a genuine artist.

Don’t just take our word for it!

Although we’re convinced that Ivan Chefs Justo one of Havana’s finest establishments. You don’t just have to take our word for it. Here are some comments and reviews left on TripAdvisor which back up what we’re saying!

“I love the interior of Ivan Justo – such a charming place. I recommend coming here for lunch and to get a table on the top floor.” (618bentek – January 2020)

“Best meal of our trip to Cuba (even my Cuban-born husband was impressed). We had dinner here on New Year’s Eve and the food was spectacular, as was the ambiance. Every dish was a delight, from the appetisers to the main courses. We had a lovely open-air table at the very peak of the restaurant…really wonderful!” (Theerika – January 2020)

“Do whatever to dine here! Each of our 4 prior nights dining experiences at our 5-star concierge’s suggestion left us pondering whether Cuban gourmet exists or it’s an oxymoron. Our last night here affirmatively answered our question. All 4 of us ordered different plates. Everything was scrumptiously succulent; the service was excellent, and the ambiance is cozy. Don’t miss this experience!” (Giveit4ward – January 2020).

“Having dined just around the corner the previous evening, we found Ivan Chef Justo quite easily, although as entry is through just one door leading to the upper level it could be easy to miss. That would indeed be a great pity, as the food was extremely good. The atmosphere is one of special seclusion and added to a lovely dining experience.” (Trollydolly747 – December 2019).

We invite you to visit Ivan Chefs Justo and see for yourself. Yours could be the next 5-star review!

The cherry on the cake

It’s clear from the above that this is a popular place to eat. Revered by royalty, celebrated by celebrities and marvelled at by the masses. Ivan Chefs Justo is a “must” if you’re lucky enough to be in Havana in need of some nutrition.

So, what’s the pièce de résistance? Well, incredibly, Ivan was Fidel Castro’s old chef and Bloomberg mentioned that it has become one of the best places to eat in all Cuba.

Praised for its excellent and professional service, which is always attentive and quick. The stand-out element of Ivan Chefs Justo is the customer experience. Ivan strives to make it world-class, and as the chefs here regularly cater for thousands of people from all over the world. It’s a refreshing and cosmopolitan vibe that offers diners new and exciting tastes, fittingly, from all over the world.