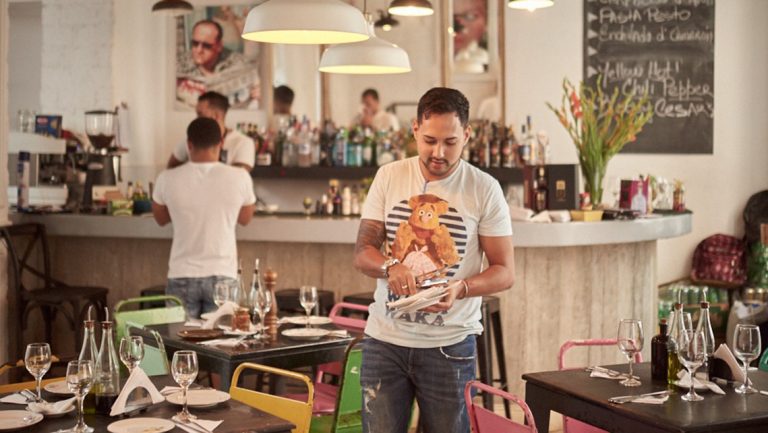 What do you think of when someone says Cuba? Let me guess; Che Guevarra, Fidel Castro, the missile crisis, The Buena Vista Social Club, 1950s American Cadillacs, cigars and Mojitos. Maybe they don’t come in that order, but I bet I wasn’t too far off.

Anyway, don’t feel bad because most people would list exactly the same things; give or take one or two. What hardly ever appears on people’s lists though? What one thing is missing?

However, before you whip out your phone and start googling “traditional Cuban food”; whilst feeling about as cultured as Uncle Albert in The Louvre, read on. Something interesting is happening in Cuba and it isn’t just affluent “gastrophiles”; or gluttonous gastronomes who are tucking in – this revolution knows no class boundaries.

Rice and beans or beans and rice?

There’s a good reason why you probably didn’t include Cuban gastronomy in your list. Although Cuba has always been a fascinating, captivating and aesthetically beautiful travel destination; effortlessly catering for adventure, culture and recently making inroads in the luxury travel category. The food simply didn’t have the variety or the quality of other Caribbean destinations.

This was because, put simply; due to the numerous political embargoes imposed upon the country from their gigantic neighbours across the Florida Straits. Coupled with the fact that Cubans earned low salaries and didn’t have the disposable income to create edible art, Cuba’s traditional gastronomy has always been – ahem – basic.

Inexpensive, honest ingredients like rice, beans, chicken and pork have historically formed the principal ingredients that the average Cuban uses to stave of the pangs of hunger. And while wishing to stay well clear of sounding critical, it was rather a case of:

“What’s for dinner tonight mama, rice and beans or beans and rice?”

We just don’t know what Che Guevara would have thought of this gastronomical revolution currently sweeping across Cuba. Whether he’s turning slowly in his grave (at Gas Mark 4 for 45 minutes); or whether he’d have licked his lips and got stuck in, ever since five decades of tense isolation were brought to a close recently, diplomatic relations with the US have been taken out of the freezer to thaw.

As a happy consequence, more wealth is coming into Cuba; and more people are empowered to set up their own businesses. With Cuba having undergone a terrific boom in tourism during the Obama presidency. Plus a wide range of new ingredients being imported into the country for the first time in four generations. The locals have put “dos” and “dos” together and made “cuatro”.

Aside from restaurants, another type of establishment that has seen rapid growth whilst catering for peckish tourists is the “paladar”. These were typically small private restaurants that operated out of people’s homes by using a few old tables scattered around. Covered by gaudy plastic tablecloths, and the menus on offer provided the typical variances of chicken, pork, rice and beans that Cubans had grown accustomed to.

Nowadays however, since the country has opened its shutters to the world; they have State permission to be bigger than just one room. They can stay open late and be staffed by waiters instead of family members; as the markets are onboard with this gastronomical revolution. The “paladares” can be more ambitious with their menus, and some of Cuba’s top homegrown chefs have come back from their self-inflicted exiles. Now to cook high quality cuisine “en casa”.

One such example is Paladar Los Mercaderes. Thirty years ago, the thought of tourists ascending a flower-strewn staircase in order to access a gloriously renovated suite of colonial rooms. Where diners tuck into lobster with pineapple glaze or eggplant lasagne; all while being serenaded by a resident violinist.

But, as more and more tourists bring money and opportunity into Cuba; paladares like Los Mercaderes are seizing the moment. And State run restaurants still offering the bland menus of yesteryear are being left behind. Well, you know you’re onto a sound business plan when Madonna, Natalie Portman, Helen Hunt, and other A-listers keep coming back. La Guarida on Calle Gervasio y Escobar is so chic, they advertise on their website that:

“Not everyone is welcome there.”

So, if you want to dine there, please get in touch. But don’t be deterred though, it’s a quote from the film “Fresa y Chocolate” that was shot there.

One revolution leads to another

Although Aristotle wasn’t talking specifically about gastronomy and art when he exclaimed that one revolution leads to another. It does seem fairly apt when you see what’s happening in Havana.

Whisper it cautiously, but there’s still a very real embargo in place and as a result; the creeping tendrils of the well-established but fairly mundane American brands have yet to gain a foothold in Cuba. For how long remains a mystery, but at the moment; filling this refreshing void of generic chain coffee shops and fast-food “restaurants”. Local entrepreneurs have harnessed their artistic creativity into an enticing selection of bohemian bars and cafes.

Despite the semi-pretentious air of vintage sewing-machines acting as tables and students sipping dark coffee in darker corners; comfortable in their mock 21st anarchy, the snacks and tapas on offer are genuinely a delight. To quote a source of genuine Cuban expertise, our resident expert, Johnny Considine, confirms that a general rule of thumb for Cuba was:

“The simpler the dish, the better it will be.”

Now, Cuba’s culinary curiosity has opened the kitchen hatch to a whole world of new ideas.

A sprig of mint from the garden?

Another interesting angle about this food-related phenomenon is that the vast majority of the food that Cuba produces is, accidently, totally organic.

The collapse of the Soviet Union in 1991 forced Cuba to become self-reliant in its agricultural production. The country’s innovative solution was organic farming, and the creation of “organoponicos”. The deliciously named organoponicos are organic vegetable gardens. And are the visible answer to a very serious problem Cuba once had; how to feed itself.

Before the Cuban revolution in 1953, almost half the agricultural land in Cuba was owned by just 1% of the people. By 1959 when the revolution was over, agriculture was nationalised and mechanised, borrowed from the Soviet blueprint. Trade with the USSR involved swapping sugarcane, which Cuba produced in industrial abundance, for cheap food and materials like machinery and petrochemical fertilisers.

But when the USSR collapsed, Cuba’s ability to feed itself collapsed with it. Within a year, the country had lost 80% of its trade and Cubans started to go hungry. The country had to produce twice as much food with less than half the chemical inputs and people were encouraged to move from the cities to the countryside.

That’s how the unique system of organoponicos, or organic farming, was started. It’s highly likely that the sprig of mint in your Mojito cocktail was grown freshly and organically on an organoponico. Cheers!

If the heritage of a nation is even richer by a larger number of tributary cultures flowing into its pool, then the gastronomy mirrors it. History tells us that three of the largest tributary cultures that have contributed to what Cuba has become today are the indiginous people; those who have always inhabited the island, that of Spain, the colonisers, and that of West Africa, the slaves who were brought to build and farm the land. Evidently, these peoples have all left their mark on Cuban gastronomy.

Over the years however, a significant number of other cultures have arrived on these shores; and added their own pinches of salt to the broth. The French, Italians, North Africans, Asians – all of these countries can be tasted in “la comida cubana”.

The great thing about studying history is that whenever multiple cultures come together, mix and form a common, functional society, we always see the same thing. What’s the first thing people do at the end of a tough day in the fields? Exactly – they flop down in their most comfortable chair, open a cool flask of something strong and prepare some food. So, what better way of recognising the richness of Cuba’s multicultural gastronomical past?

Well, by organising a Culinary Workshop called Cuba Sabe 2020 (which roughly translates as “Cuba knows” or “Cuba tastes” – we can assume the latter).

Dreamt up, put together and finally organised by the cultural tourism agency Paradiso; the National Council of Cultural Heritage, the Culinary Federation of Cuba and other various national associations of bartenders and sommeliers, the event will take place on 9th, 10th and 11th January next year. And will be dedicated to half a millennium of Cuban gastronomic evolution.

It’s not all food either. Some of the planet’s most exquisite cocoa is produced in the Eastern mountains. And to be frank, coffee is more than a sugary way of waking up in the morning. For Cubans, coffee is almost an identity. Just so you can begin to gauge how much coffee goes beyond being a social drink; families all over the island constantly brew coffee throughout the day to provide strangers with a steaming cup; just on the off-chance one should drop round. It’s not just a social drink, it’s a bastion of dignified hospitality.

The Cuba Sabe festival does in fact carry some clout in Cuba. It’s organised and patronised by Cuba’s “first lady”; (no official title, simply the president’s wife) Lis Cuesta Peraza. Just another demonstration that this revolution starts from the upper echelons of Cuban society, and runs right through to the men and women on the street.

Derived from Asori Soto’s internationally acclaimed film Cuban Food Stories, the spin-off programme Cuban Food Stories “culinary tours” are an invitation for anyone who wants to get to know more about the evolution of Cuba’s culinary movement.

Developed in conjunction with Cuba Private Travel, the go-to agency for high-end travel based in Havana, the Cuban Food Stories culinary tours state that unlike many conventional food tours, this luxury experience will place you at the forefront of a cultural revival of flavours, art and music. Visitors will get the chance to meet the people spearheading this movement as well as the everyday Cubans that inspire them on a daily basis.

It’s an homage to Cuba’s rich and diverse food culture and the international press from Forbes to The Seattle Times are hailing it as “a gorgeous love letter to the country and people of Cuba”.

In Cuba, the word “revolution” usually conjures up images of bearded guerrillas and not imaginative chefs preparing platters of haute cuisine. Trust me on this though – in five years, when I ask you again about what you think of when someone says Cuba, “Cuban gastronomy” might just be a little further up the list.

1 thought on “Visit Cuba and join the Cuban Food Revolution”